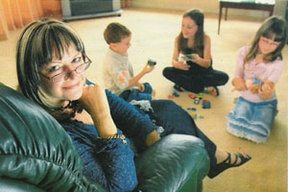 Unpaid word, or paid work: that is the motherhood question … but if you psychoanalysed the ‘answer’, its personality could be described as a deranged, confused, bewildered lost soul. There is no right or wrong response, only what is best for you.

Yet, hasn’t society done an astoundingly stupendous job of telling women what they need to do to be a perfect mother? Collectively, it’s an insulting slap in the face.

Historically, the vast majority of women have always worked while raising their children – “motherhood was linked to child-bearing rather than child-rearing”. Then in the mid-late 1700’s the first books started to appear (written by men) that introduced to the wealthier upper-class the idea that motherhood should be delightfully satisfying; that mothers had ethical responsibilities to raise their children to be moral Christians; and that this noble duty required emotional responsibility and devoted commitment. That was it; the first woeful seeds were sewn of men defining mothercraft. Mothers began to feel guilt.
Earlier this century, for the sake of the unemployed war heroes, fashions returned to dresses with small waists and full skirts, as society resurrected philosophies that a woman’s place was in the home. This was followed by feminists’ fight of ‘Equal Pay for Equal Work’ eliminating the male’s higher wage, with the fall-out being that a husband’s income alone can often no longer cover the cost of an entire household.

It is true that many women enjoy returning to the workforce, as an energizing opportunity to enjoy mental stimulation again; wear dryclean-only clothes again, talk intellectually to mature adults again; and enjoy a break from menial domesticity.

For other mothers, giving up work to be a ‘kept woman’ is almost pure bliss. Such as, the business tycooness who happily gives up the Armani suits, Prada accessories, two hours each day in traffic jams, and pretentious business breakfast-meetings; or the overworked secretary who joyfully hands in her letter of resignation to be rid of her chauvinistic, egotistic, arsehole boss. Suddenly for those women, life can for once become more spontaneous, instead of needing to be so time-managed.

A stay-at-home mother can be a pretty happy camper, providing a sort of noble, indispensable and quintessential status – they are ‘the Home’. Being fundamentally essential to several people can feel good, and so it should!

Eventually out of an initial desire to produce some income while still being available to their children, often mothers unveil talents they simply never knew they had … It’s the sales executive who discovers she makes wonderful pottery; it’s the flight attendant who becomes a landscaper; it’s the office manager who becomes a website designer; it’s the travel consultant who becomes a midwife; it’s the women who start up numerous cottage industries based from home.

For a seemingly growing number of mums, after the intensive baby years and caring less about their old set of priorities (as the maturing soul knows now how inconsequential some of those values were), motherhood can actually be a doorway into a more Bohemian state; one of living to your own sense of values, seeking inner authenticity; and standing up for your own unique way – the embryonic beginnings of learning to trust Life’s unknown journeys!​